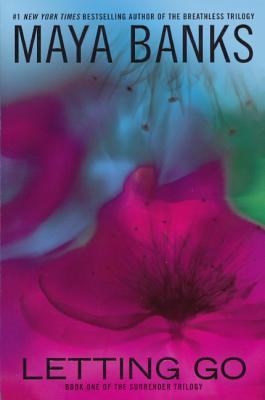 THE FIRST BOOK OF THE SURRENDER TRILOGY
In her sensational Breathless Trilogy, #1 "New York Times" bestselling author Maya Banks tested the boundaries of desire. In her new trilogy, there's only one thing left to do: cross them. And never have the consequences of erotic exploration been so irresistibly inviting, so shockingly intimate, and so totally unexpected...
LETTING GO
Josslyn found perfection once, and she knows she'll never find it again. Now widowed, she seeks the one thing her beloved husband couldn't give her: dominance. Lonely, searching for an outlet for her grief and wanting only a brief taste of the perfection she once enjoyed, she seeks what she's looking for at an exclusive club that caters to people indulging in their most hedonistic fantasies. She never imagined that what she'd find would be the one man who's long been a source of comfort--and secret longing. Her husband's best friend.
Dash has lived in an untenable position for years: in love with his best friend's wife but unwilling to act on that attraction. He'd never betray his best friend. And so he's waited in the wings, offering Joss unconditional support and comfort as she works past her grief, hoping for the day when he can offer her more.
When he finds her in a club devoted to the darker edges of desire, he's furious because he thinks she has no idea what she's getting herself into. Until she explains in detail what it is she wants. What she needs. As realization sets in, he is gripped by fierce, unwavering determination. If she wants dominance, he is the only man who will introduce her to that world. He is the only man who will touch her, cherish her...love her. And the only man she'll ever submit to.

She lives in the South with her husband and three children and other assorted babies, such as her two Bengal kitties and a calico who's been with her as long as her youngest child. She's an avid reader of romance and loves to dish books with her fans and anyone else who'll listen! She very much enjoys interacting with her readers on Facebook and Twitter as well as in her Yahoo!
or
Not Currently Available for Direct Purchase
Copyright © 2020 American Booksellers Association