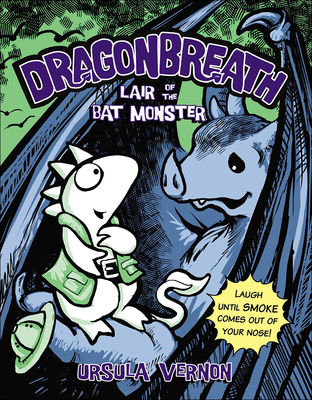 Lair of the Bat Monster (Dragonbreath #4)

Danny Dragonbreath is hoping to see lots of cool bats when he and his best friend, Wendell, visit Danny's cousin, a bat specialist in Mexico. But he "isn't" expecting to get up close and personal with a giant bat monster, who kidnaps Danny and carries him off to her lair Now nerdy Wendell will finally get a chance to be a hero . . . but only if he can hunt down the bat monster before she permanently adopts Danny as her bat monster baby.
Ursula Vernon has packed the fourth book in this laugh-until-smoke-comes-out-of-your-nose series with fantastic bat facts and hilarity of the highest order. Wimpy Kid fans everywhere will love this decidedly un-wimpy (but often unlucky ) dragon. Perfect for fans of "Wimpy Kid" and "Bad Kitty."
Watch a Video.