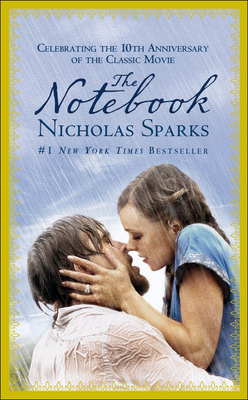 Every so often a love story so captures our hearts that it becomes more than a story-it becomes an experience to remember forever. The Notebook is such a book. It is a celebration of how passion can be ageless and timeless, a tale that moves us to laughter and tears and makes us believe in true love all over again...
At thirty-one, Noah Calhoun, back in coastal North Carolina after World War II, is haunted by images of the girl he lost more than a decade earlier. At twenty-nine, socialite Allie Nelson is about to marry a wealthy lawyer, but she cannot stop thinking about the boy who long ago stole her heart. Thus begins the story of a love so enduring and deep it can turn tragedy into triumph, and may even have the power to create a miracle...

With over 85 million copies of his books sold, Nicholas Sparks is one of the world's most beloved storytellers. His novels include twelve #1 "New York Times "bestsellers, and all his books, including "Three Weeks with My Brother," the memoir he wrote with his brother, Micah, have been "New York Times" and international bestsellers, and were translated into more than fifty languages. Eight of Nicholas Sparks's novels-"Safe Haven," "The Lucky One," "The Last Song," "Dear John," "Nights in Rodanthe," "The Notebook," "A Walk to Remember," and "Message in a Bottle"-were also adapted into major motion pictures. In 2011, he founded the Nicholas Sparks Foundation to inspire and transform students' lives though education, curriculum development, and life-changing international experiences. To learn more, go to www.NicholasSparksFoundation.org. The author lives in North Carolina with his wife and family. You can visit him at www.NicholasSparks.com.
Loading...
or support indie stores by buying on
(This book is on backorder)