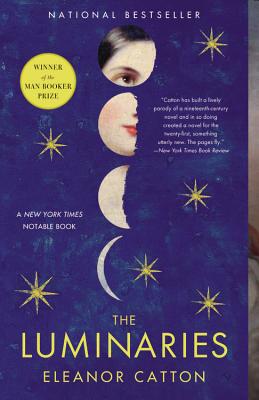 The bestselling, Man Booker Prize-winning novel hailed as "a true achivement. Catton has built a lively parody of a 19th-century novel, and in so doing created a novel for the 21st, something utterly new. The pages fly."--New York Times Book Review
It is 1866, and Walter Moody has come to stake his claim in New Zealand's booming gold rush. On the stormy night of his arrival, he stumbles across a tense gathering of 12 local men who have met in secret to discuss a series of unexplained events: a wealthy man has vanished, a prostitute has tried to end her life, and an enormous cache of gold has been discovered in the home of a luckless drunk. Moody is soon drawn into a network of fates and fortunes that is as complex and exquisitely ornate as the night sky.
Richly evoking a mid-nineteenth-century world of shipping, banking, and gold rush boom and bust, THE LUMINARIES is at once a fiendishly clever ghost story, a gripping page-turner, and a thrilling novelistic achievement. It richly confirms that Eleanor Catton is one of the brightest stars in the international literary firmament.

Eleanor Cattonholds an MFA from the Iowa Writers' Workshop andan MA in fiction writing from the InternationalInstitute of Modern Letters. She lives in Auckland, New Zealand.
Loading...
or
Not Currently Available for Direct Purchase