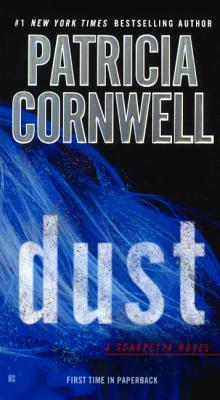 With unparalleled high-tension suspense and the latest in forensic technology, Patricia Cornwell once again proves her exceptional ability to surprise--and to thrill--in this electrifying Kay Scarpetta novel.
A body, oddly draped in an unusual cloth, has just been discovered inside the sheltered gates of MIT, and it's suspected the identity is that of missing computer engineering grad student Gail Shipton, last seen the night before at a trendy Cambridge bar. It appears she's been murdered, mere weeks before the trial in her $100 million lawsuit against her former financial manager, and Massachusetts Chief Medical Examiner Kay Scarpetta doubts it's a coincidence. She also fears the case may have a connection with her computer genius niece, Lucy.
In "Dust," Scarpetta and her colleagues are up against a force far more sinister than a sexual predator who fits the criminal classification of a "spectacle killer." The murder of Gail Shipton soon leads deep into the dark world of designer drugs, drone technology, organized crime, and shocking corruption at the highest levels.

Patricia Cornwell is one of the world's major internationally bestselling authors, translated into thirty-six languages in more than 120 countries. She is a founder of the Virginia Institute of Forensic Science and Medicine; a founding member of the National Forensic Academy; a member of the Advisory Board for the Forensic Sciences Training Program at the Office of the Chief Medical Examiner, New York City; and a member of the Harvard-affiliated McLean Hospital's National Council, where she is an advocate for psychiatric research. In 2008, Cornwell won the Galaxy British Book Awards' Books Direct Crime Thriller of the Year--the first American to win this prestigious award. In 2011, she was awarded the Medal of Chevalier of the Order of Arts and Letters by the Ministry of Culture in Paris. Her most recent bestsellers include "The Bone Bed," "Red Mist, ""Port Mortuary," "The Scarpetta Factor," "The Front, " and "Portrait of a Killer: Jack the Ripper." Her earlier works include "Postmortem"--the only novel to win five major crime awards in a single year--and "Cruel and Unusual, " which won Britain's Gold Dagger Award for best crime novel of 1993. Dr. Kay Scarpetta herself won the 1999 Sherlock Award for the best detective created by an American author.
Loading...
or
Not Currently Available for Direct Purchase