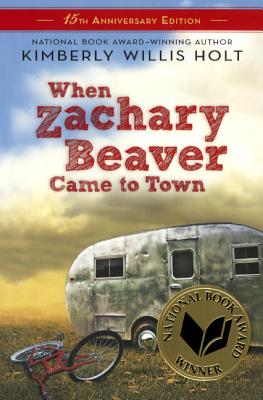 "The red words painted on the trailer caused quite a buzz around town and before an hour was up, half of Antler was standing in line with two dollars clutched in hand to see the fattest boy in the world."
"Toby Wilson is having the toughest summer of his life. It's the summer his mother leaves for good; the summer his best friend's brother returns from Vietnam in a coffin. And the summer that Zachary Beaver, the fattest boy in the world, arrives in their sleepy Texas town. While it's a summer filled with heartache of every kind, it's also a summer of new friendships gained and old friendships renewed. And it's Zachary Beaver who turns the town of Antler upside down and leaves everyone, especially Toby, changed forever."
With understated elegance, Kimberly Willis Holt tells a compelling coming-of-age story about a thirteen-year-old boy struggling to find himself in an imperfect world. At turns passionate and humorous, this extraordinary novel deals sensitively and candidly with obesity, war, and the true power of friendship. "When Zachary Beaver Came to Town" is the winner of the 1999 National Book Award for Young People's Literature.

Kimberly Willis Holt is the author of the many award-winning novels for young adults and children, including "The Water Seeker, My Louisiana Sky," and "Keeper of the Night." She is also the author of the bestselling Piper Reed series of chapter books and picture books including "Waiting for Gregory" and "Skinny Brown Dog." "When Zachary Beaver Came to Town" was her third book and won a National Book Award for Young People's Literature. She lives in West Texas with her family. Holt was born in Pensacola, Florida, and lived all over the U.S. and the world--from Paris to Norfolk to Guam to New Orleans. She long dreamed of being a writer, but first worked as a radio news director, marketed a water park, and was an interior decorator, among other jobs. She resides in West Texas with her family.
Loading...
or
Not Currently Available for Direct Purchase