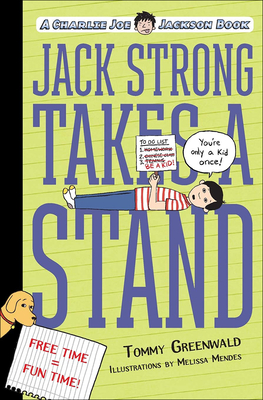 Jack Strong just wants to be a regular kid. But his parents have overscheduled his week with every extracurricular activity under the sun: tennis, baseball, cello, karate, tutoring, and Chinese language lessons--all on top of regular homework. His parents want him to be "well-rounded" and prepared for those crucial college applications. Jack's just about had enough.

And so, he stages a sit-in on his couch and refuses to get up until his parents let him quit some of the extracurriculars. As Jack's protest gains momentum, he attracts a local television host who is interested in doing a segment about him. Tensions rise as counter-protesters camp out across the street from Jack and his couch. Jack's enjoying this newfound attention, but he's worried that this sit-in may have gone too far.

Tommy Greenwald went on strike once in his life, when the local Baskin-Robbins decided to discontinue his favorite flavor, German Chocolate Cake. The strike lasted until he realized they still sold Rocky Road. When Tommy Greenwald's not sitting on his couch, he's the executive creative director at SPOTCO, an entertainment advertising agency in New York City. Tommy swears he wasn't anything like the over-involved dad portrayed in this book. Ask his kids! No wait, don't. Tommy lives in Connecticut with his wife, Cathy; his non-reading sons, Charlie, Joe and Jack; and his dogs.

Melissa Mendes is a cartoonist and illustrator living and working in Hancock, Massachusetts, with her best beau, Charles Forsman, and their best cat, Bruce.
Loading...
or
Not Currently Available for Direct Purchase