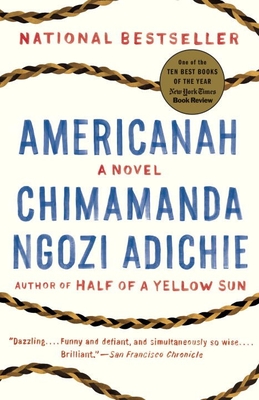 A powerful, tender story of race and identity by Chimamanda Ngozi Adichie, the award-winning author of "Half of a Yellow Sun."
Ifemelu and Obinze are young and in love when they depart military-ruled Nigeria for the West. Beautiful, self-assured Ifemelu heads for America, where despite her academic success, she is forced to grapple with what it means to be black for the first time. Quiet, thoughtful Obinze had hoped to join her, but with post-9/11 America closed to him, he instead plunges into a dangerous, undocumented life in London. Fifteen years later, they reunite in a newly democratic Nigeria, and reignite their passion--for each other and for their homeland.

Chimamanda Ngozi Adichie grew up in Nigeria. Her work has been translated into thirty languages and has appeared in various publications, including "The New Yorker," "Granta," "The O. Henry Prize Stories," the "Financial Times," and "Zoetrope: All-Story." She is the author of the novels "Purple Hibiscus," which won the Commonwealth Writers' Prize and the Hurston/Wright Legacy Award, and "Half of a Yellow Sun," which won the Orange Prize and was a National Book Critics Circle Award Finalist, a "New York Times" Notable Book, and a "People" and "Black Issues" Book Review Best Book of the Year; and, most recently, the story collection "The Thing Around Your Neck." A recipient of a MacArthur Fellowship, she divides her time between the United States and Nigeria.
Loading...
or support indie stores by buying on
(This book is on backorder)