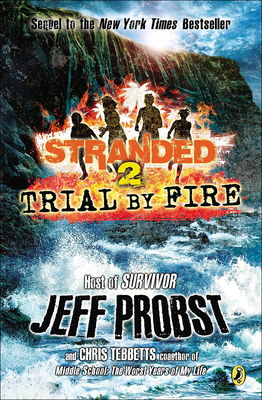 Sequel to the "New York Times" bestseller "STRANDED," seen "The Today Show," "Rachael Ray, " and" Kelly and Michael."
From the multi-Emmy Award winning host of "Survivor "and the "New York Times" bestselling co-author of "Middle School: The Worst Years of My Life" comes a fantastic new middle grade series
They thought it couldn't get any worse. They were wrong.
Being shipwrecked on a jungle island in the middle of the South Pacific was bad enough. But now that Carter, Vanessa, Buzz and Jane have lost their boat--and almost everything on board--to another violent storm, it's like starting over. That means finding food and shelter, making fire for the first time, dealing with the wild boars that roam the island--and of course, figuring out how to get along (and not kill each other in the process). Survival is no individual sport in a place like this, but there's only one way to learn that. The hard way.
Books in the Stranded series:
"Stranded (Book 1)"
"Trial By Fire (Book 2)"
"Survivors (Book 3)"
Books in the companion series, Stranded, Shadow Island
"Forbidden Passage (Book 1)"
"Sabotage (Book 2)"
"Desperate Measures (Book 3, coming soon )

Jeff Probst (www.jeffprobst.com) is the multi-Emmy Award-winning host and executive producer of the popular series Survivor. A native of Wichita, Kansas, Probst is married and lives in Los Angeles with his wife and two children when not traveling the world. He can be followed on Twitter @jeffprobst and online at www.jeffprobst.com.

Chris Tebbetts is the New York Times bestselling co-author of James Patterson's Middle School series. Originally from Yellow Spring, Ohio, Tebbetts is a graduate of Northwestern University. He lives and writes in Vermont.
Loading...
or support indie stores by buying on