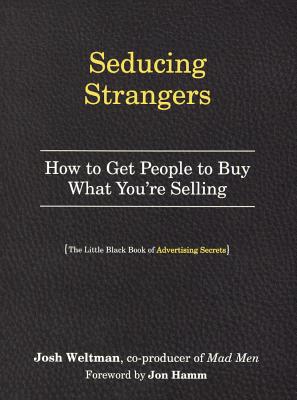 How to Get People to Buy What Youre Selling. the Little Black Book of Advertising Secrets

The author says it best: "This book is for people like you and me. People who go to work and--using words, pictures, music, and stories--are expected to make s**t happen . . . to make the phone lines light up and the in-box fill up. Attract fans, friends, and followers. Make the cash register ring. Win the business. Close the deal. Sell something." Joshua Weltman knows just how to do that, and teach others how to do it, too. An advertising creative director for more than 25 years and the "Mad Men" co-producer responsible for Don Draper's credibility as an advertising genius, Weltman distills everything he knows about the art of persuasion into a playbook?of rules, principles, insights, insider anecdotes, and more, all tailored to the fast-changing life in the information economy. Weltman identifies the four elements of selling--one of which is behind everything from a national television campaign to an email blast. There's the ad that makes people curious--"want to know more?" That creates a sense of urgency--"limited time offer " That increases market share--"why we're unique, or just better." And the ad that protects margins--"thank you for your loyalty." And then Weltman explains how to employ these strategies, including: the six words that win business; the four kinds of stories; what to do if your product sucks; why lying in an ad will never pay off; why information reduces doubt; how to think like a force-multiplier; why different is better than better; why to remove jargon and acronyms and reveal ideas and relationships. Advertising, Joshua Weltman argues, is a toolbox, not a tool, and used right it makes people happy. "Seducing Strangers" shows you how.""People often ask me questions, or ask my opinions, on or about the world of advertising. My stock response is 'You know I play a fictional advertising executive, right?' That's usually used to cover the ignorance or stupidity of whatever I am about to say next. In the future I will simply refer them to Josh Weltman."" --from the Foreword by Jon Hamm.