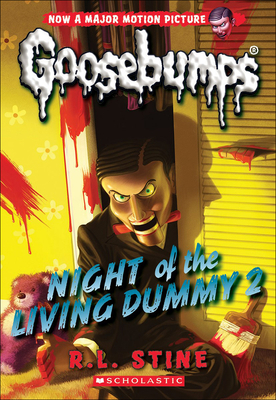 The original books featuring the scariest creatures from the Goosebumps movie, in theaters October 16, 2015
Amy's ventriloquist dummy, Dennis, has lost his head...for real. So Amy begs her family for a new dummy. That's when her dad finds Slappy in a local pawnshop. Slappy's kind of ugly, but at least his head stays on
Amy loves practicing her new comedy routine. It's like this dummy knows what she's thinking. Like he can move by himself. And it's a lot of fun...until Slappy starts a routine of his own. A nasty horrible, routine that isn't funny at all.
Slappy may have a new owner, but he's up to the same old tricks...

R.L. Stine's has more than 350 million English language books in print, plus international editions in 32 languages, making him one of the most popular children's authors in history. Besides Goosebumps, R.L. Stine has written series including: Fear Street, Rotten School, Mostly Ghostly, The Nightmare Room, and Dangerous Girls. R.L. Stine lives in New York with his wife, Jane, and his King Charles spaniel, Minnie. www.RLStine.com.
Loading...
or
Not Currently Available for Direct Purchase