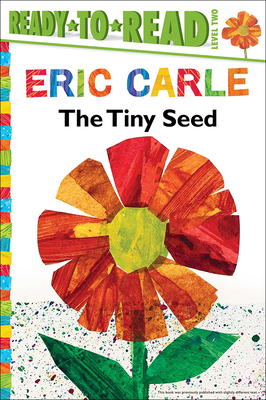 The charming tale of The Tiny Seed, by beloved author and illustrator Eric Carle, is now available as a Level 2 Ready-to-Read Eric Carle's classic story of the life cycle of a flower is told through the adventures of a tiny seed. Everyone will cheer for the seed's progress as it floats across the sky, nestles in the ground, and finally grows into the giant flower it was always meant to be. With the dazzling collage illustrations and lively text in this Level 2 Ready-to-Read, Carle has created a triumphant and fascinating tale for young readers.

Eric Carle (1929-2021) was acclaimed and beloved as the creator of brilliantly illustrated and innovatively designed picture books for very young children, including Papa, Please Get the Moon for Me; Have You Seen My Cat?; and TheTiny Seed. His best-known work, The Very Hungry Caterpillar, has been translated into seventy languages and sold over fifty-five million copies. Carle illustrated more than seventy books, many bestsellers, most of which he also wrote, and more than 170 million copies of his books have sold around the world. In 2003, Carle received the Children's Literature Legacy Award for lifetime achievement in children's literature. In 2002, Eric and his wife, Barbara, cofounded The Eric Carle Museum of Picture Book Art (CarleMuseum.org) in Amherst, Massachusetts, a 40,000-square-foot space dedicated to the celebration of picture books and picture book illustrations from around the world, underscoring the cultural, historical, and artistic significance of picture books and their art form. Eric Carle passed away in May 2021 at the age of ninety-one. His work remains an important influence on artists and illustrators at work today. Find out more at Eric-Carle.com.
Loading...
or support indie stores by buying on