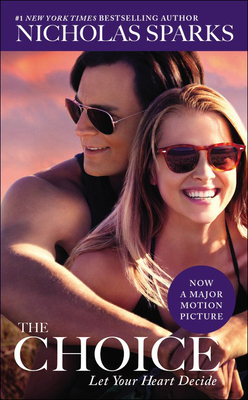 #1 New York Times bestseller Nicholas Sparks turns his unrivaled talents to a new tale about love found and lost, and the choices we hope we'll never have to make.
Travis Parker has everything a man could want: a good job, loyal friends, even a waterfront home in small-town North Carolina. In full pursuit of the good life - boating, swimming, and regular barbecues with his good-natured buddies -- he holds the vague conviction that a serious relationship with a woman would only cramp his style. That is, until Gabby Holland moves in next door. Spanning the eventful years of young love, marriage and family, THE CHOICE ultimately confronts us with the most heartwrenching question of all: how far would you go to keep the hope of love alive?

With over 100 million copies of his books sold, Nicholas Sparks is one of the world's most beloved storytellers. His novels include 12 #1 "New York Times" bestsellers. All his books have been "New York Times" and international bestsellers, and were translated into more than 50 languages. Ten Sparks novels have been adapted into major motion pictures, with "The Choice" coming in February 2016.
Loading...
or
Not Currently Available for Direct Purchase