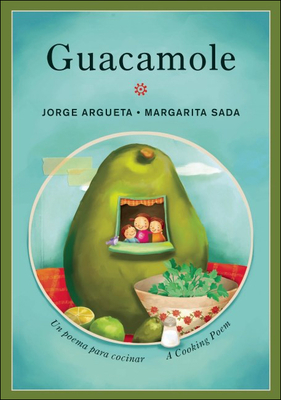 Now available in paperback, "Guacamole" is the third title of Jorge Argueta's popular bilingual Cooking Poems series, celebrating the joys of preparing, eating and sharing food.
Guacamole originated in Mexico with the Aztecs and has long been popular in North America, especially in recent years due to the many health benefits of avocados. This version of the recipe is easy to make, calling for just avocados, limes, cilantro and salt. A little girl dons her apron, singing and dancing around the kitchen as she shows us what to do. Poet Jorge Argueta sees beauty, magic and fun in everything around him avocados are like green precious stones, salt falls like rain, cilantro looks like a little tree and the spoon that scoops the avocado from its skin is like a tractor.
As in all the titles in this series, "Guacamole" conveys the pleasure of making something delicious to eat for people you really love. A great book for families to enjoy together.

Jorge Argueta is an award-winning author of picture books and poetry for young children. He has won the International Latino Book Award, the Americas Book Award, the NAPPA Gold Award and the Independent Publisher Book Award for Multicultural Fiction for Juveniles. His books have also been named to the Americas Award Commended List, the USBBY Outstanding International Books Honor List, Kirkus Reviews Best Children s Books and the Cooperative Children s Book Center Choices. A native Salvadoran and Pipil Nahua Indian, Jorge spent much of his life in rural El Salvador. He now lives in Daly City, California.

Margarita Sada is a well-known Mexican artist who has illustrated other stories that derive from Yoruba mythology, such as the award-winning "Venir del Mar" by Jose Alberto Caban. Many of her books have been selected for Mexico s SEP Libros del Rincon program, which provides books to school children throughout the country. She lives in Mexico City.