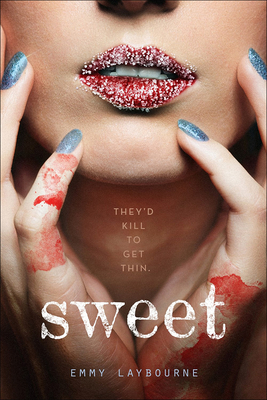 They'd kill to get thin.

The luxurious celebrity cruise launching the trendy new diet sweetener Solu should be the vacation of a lifetime. But Laurel is starting to regret accepting her friend Viv's invitation. She's already completely embarrassed herself in front of celebrity host Tom Forelli-the hottest guy ever -and she's too sick to even "try" the sweetener. And that's "before" Viv and all the other passengers start acting really strange.

Tom knows that he should be grateful for this job and the chance to shed his former-child-star image. His publicists have even set up a 'romance' with a sexy reality star. But as things on the ship start to get wild, he finds himself drawn to a different girl. And when the hosting gig turns into an expose on the shocking side effects of Solu, it's Laurel that he's determined to save.

Emmy Laybourne, author of the "Monument 14 "trilogy, takes readers on a dream vacation in "Sweet" that goes first comically, then tragically, then "horrifyingly," wrong

Simultaneously terrifying, hilarious, and action-packed, Sweet is a wild ride that holds up a warped mirror to our society. I loved it from the first line to the last. Marie Lu, "New York Times" bestselling author of "Legend" and "The Young Elites.

EMMY LAYBOURNE is a novelist, teacher, and former character actress. Emmy's "Monument 14" trilogy has earned critical praise ("Frighteningly real riveting" - New York Times Book Review, Editor's Choice) and has been nominated by readers to the YALSA Teens Top Ten in 2013 and 2014.Before her life as an author, Emmy performed original comedy on Comedy Central, MTV, and VH1; and acted in the movies "Superstar," "The In-Laws," and "Nancy Drew," among others. Emmy lives outside New York City with her husband, two kids, and a flock of 8 nifty chickens."
Loading...
or support indie stores by buying on