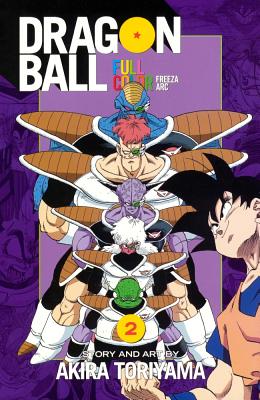 After years of training and adventure, Goku has become Earth's ultimate warrior. And his son, Gohan, shows even greater promise. But the stakes are increasing as even deadlier enemies threaten the planet. Now experience this legendary manga classic in full color
Gohan and Kuririn struggle to keep the last Dragon Ball from falling into Freeza and Vegeta's possession, but how will they fare against Freeza's Ginyu Force a group of five of the strongest fighters in the galaxy? If they want to survive, they may have to do the unthinkable and team up with Vegeta

Renowned worldwide for his playful, innovative storytelling and humorous, distinctive art style, Akira Toriyama burst onto the manga scene in 1980 with the wildly popular Dr. Slump. His hit series Dragon Ball (published in the U.S. as Dragon Ball and Dragon Ball Z) ran from 1984 to 1995 in Shueisha's Weekly Shonen Jump magazine. He is also known for his design work on video games such as Dragon Quest, Chrono Trigger, Tobal No. 1, and most recently, Blue Dragon. His recent manga works include COWA!, Kajika, Sand Land, Neko Majin, and a children's book, Toccio the Angel. He lives with his family in Japan.
Loading...
or
Not Currently Available for Direct Purchase