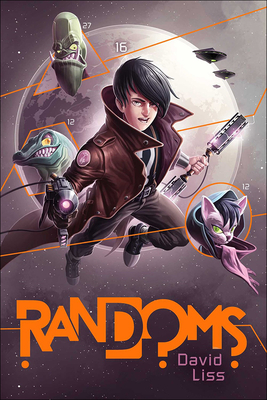 A science fiction superfan finds himself on his very own space adventure when he's randomly selected to join an alien confederacy in this exhilarating ("Booklist," starred review) middle grade debut novel.
Zeke Reynolds comes from a long line of proud science fiction geeks. He knows his games, comics, movies, and TV shows like Captain Kirk knows the starship "Enterprise." So it's a dream come true when he learns the science fiction he loves so much is based on reality and that he's been selected to spend a year on a massive space station. To evaluate humanity's worthiness, the Confederation of United Planets has hand picked three of Earth's most talented young people and then there's Zeke. He's the random.
Unfortunately, Zeke finds life in space more challenging than he d hoped. When he saves his transport ship from a treacherous enemy attack, he's labeled a war criminal. Now despised by the Confederation, rejected by his fellow humans, and pursued by a ruthless enemy, Zeke befriends the alien randoms: rejected by their own species, but loyal to each other. But their presence in the Confederation may not be so random after all, and as the danger increases, Zack's knowledge of science fiction might be the only thing that can save himself, his friends, and Earth itself.