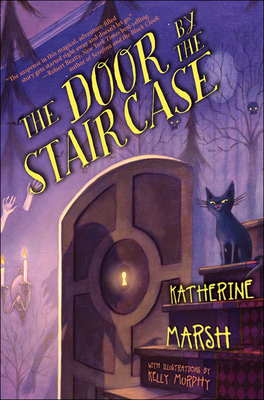 Door by the Staircase

Twelve-year-old Mary Hayes can't stand her orphanage for another night. But when an attempted escape through the stove pipe doesn't go quite as well as she'd hoped, Mary fears she'll be stuck in the Buffalo Asylum for Young Ladies forever.
The very next day, a mysterious woman named Madame Z appears at the orphanage requesting to adopt Mary, and the matron's all too happy to get the girl off her hands. Soon, Mary is fed a hearty meal, dressed in a clean, new nightgown and shown to a soft bed with blankets piled high. She can hardly believe she isn't dreaming
But when Mary begins to explore the strange nearby town with the help of her new friend, Jacob, she learns a terrifying secret about Madame Z's true identity. If Mary's not careful, her new home might just turn into a nightmare.
Award-winning author Katherine Marsh draws from Russian fairytales in this darkly funny middle-grade fantasy novel, now available in paperback.
Praise for The Door by the Staircase
* "Well-drawn characters, an original setting, and a satisfying resolution are the ingredients that make this carefully crafted middle-grade adventure a highly rewarding read."
-Kirkus Reviews, starred review * "Marsh has crafted a sparkling tale full of adventure, magic, and folklore." -School Library Journal, starred review " An] engaging, almost cinematic story . . ." -The Wall Street Journal
Praise for Jepp, Who Defied the Stars
New York Times Notable Children's Books of 2012
"The Wall Street Journal" Best Children's Books of 2012
"Narrating a young adult novel from a dwarf's perspective is nothing short of inspired. Marsh transcends genre to create an engaging narrative complex enough to keep not-so-young adults turning its pages."
-The New York Times Book Review * "This shining gem is a must-have."
-School Library Journal, starred review
* " an epic search for love, family, respect, and a destiny of one's own making."
-Publishers Weekly, starred review
* "Incorporating elements of adventure, romance, tragedy, intrigue, and science, the novel conjures a place and time not commonly explored in young adult fiction "
-Bulletin of the Center for Children's Books, starred review Praise for The Twilight Prisoner
* "Readers should be drawn in by the complex relationships between Marsh's protagonists and Jack's continuing existential struggles, caught between the worlds of the living and the dead."
-Publishers Weekly, starred review Praise for The Night Tourist
Winner of the Edgar Award for Best Juvenile Mystery, 2008
* "This intelligent and self-assured debut will compel readers from its outset, and leave them satisfied as it explores universal themes of love, loss, and closure."
-Publishers Weekly, starred review.

Katherine Marsh is the Edgar Award" "winning author of "The Night Tourist, The Twilight Prisoner," and "Jepp, Who Defied the Stars." She grew up in New York with her Russian grandmother who lovingly prepared many of the dishes in this book. Katherine currently lives in Brussels, Belgium with her husband and two children. Visit her online at www.katherinemarsh.com. Kelly Murphy is an award-winning illustrator working predominantly with traditional and mixed media. Since receiving her Bachelor of Fine Arts from the Rhode Island School of Design, she has illustrated a number of books for children, including "Secrets at Sea" by Richard Peck and the "New York Times" bestseller "Masterpiece" by Elise Broach. Visit Kelly online at www.kelmurphy.com.
Loading...
or support indie stores by buying on
(This book is on backorder)