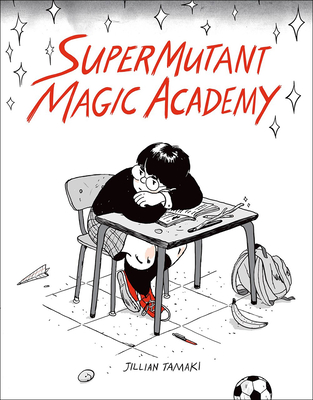 Unrequited love, underage drinking, and teen angst rule at a high school for mutants and witches
The" New York Times" and "New Yorker" illustrator Jillian Tamaki is best known for co-creating the award-winning young adult graphic novels "Skim" and "This One Summer" moody and atmospheric bestsellers. "SuperMutant Magic Academy," which she has been serializing online for the past four years, paints a teenaged world filled with just as much ennui and uncertainty, but also with a sharp dose of humor and irreverence. Tamaki deftly plays superhero and high-school Hollywood tropes against what adolescence is really like: The SuperMutant Magic Academy is a prep school for mutants and witches, but their paranormal abilities take a backseat to everyday teen concerns.
Science experiments go awry, bake sales are upstaged, and the new kid at school is a cat who will determine the course of human destiny. In one strip, lizard-headed Trixie frets about her nonexistent modeling career; in another, the immortal Everlasting Boy tries to escape this mortal coil to no avail. Throughout it all, closeted Marsha obsesses about her unrequited crush, the cat-eared Wendy. Whether the magic is mundane or miraculous, Tamaki's jokes are precise and devastating.""
" SuperMutant Magic Academy" has won two Ignatz Awards. This volume combines the most popular content from the webcomic with a selection of all-new, never-before-seen strips that conclude Tamaki's account of life at the academy.

Jillian Tamaki is a Canadian illustrator and cartoonist living in Brooklyn, New York. Her illustrations have won gold medals from the Society of Illustrators and the Society of Publication Designers. Tamaki is the co-creator of the graphic novel "Skim," which was listed as a "New York Times" Best Illustrated Book of 2008 and was nominated for four Eisner Awards and a Governor General's Literary Award. "This One Summer," her second co-authored work with Mariko Tamaki, was published in mid-2014 and spent more than a month on the "New York Times" bestseller list. Her two books of personal work are "Gilded Lilies" and "Indoor Voice."
Loading...
or
Not Currently Available for Direct Purchase