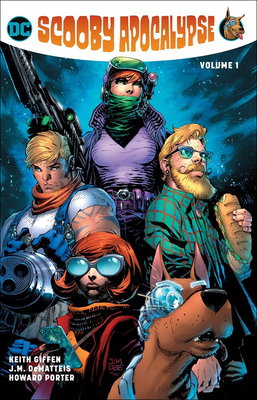 The Hanna-Barbera cartoon classic is re-imagined for a new generation in SCOOBY APOCALYPSE VOL. 1
When the world is tossed into chaos, it's up to a group of meddling kids --Fred, Daphne, Velma, Shaggy, and their dog, Scooby-Doo-- to solve the mystery and survive hordes of zombies But can they save the day and cure everyone or will they become brain-eating zombies? The creatures of the night are among us, and the crew of the Mystery Machine has to fight to survive--because in the apocalyptic badlands of the near-future, the horrors are real
Hanna-Barbera has created some of the most recognizable animated characters of all-time. As part of DC Comics' re-imagination of cartoons like Scooby-Doo, The Flintsones, Johnny Quest, Space Ghost and Wacky Racers, these new series will be infused with modern and contemporary concepts while keeping the heart and soul of the classic animation.
Collects SCOOBY APOCALYPSE #1-6.

Keith Giffen has provided plotting, scripting, artwork, or any combination thereof for titles such as ALL-STAR COMICS, LEGION OF SUPER-HEROES, RAGMAN, CREEPER, LOBO, SUICIDE SQUAD, THE DEFENDERS, HERO SQUARED!, and, um...AMBUSH BUG. He's worked on the weekly series 52 and COUNTDOWN TO FINAL CRISIS, as well as 52 AFTERMATH: THE FOUR HORSEMEN and MIDNIGHTER, plus a gazillion other things. He also was the illustrator of the new 52 series O.M.A.C.
or
Not Currently Available for Direct Purchase
Copyright © 2020 American Booksellers Association