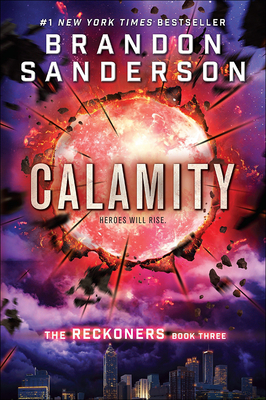 Read the final book in the #1 New York Times bestselling Reckoners series by worldwide bestselling author Brandon Sanderson
When Calamity lit up the sky, the Epics were born. David's fate has been tied to their villainy ever since that historic night. Steelheart killed his father. Firefight stole his heart. And now Regalia has turned Prof, his closest ally, into a dangerous enemy.
David knew Prof's secret, and kept it even when Prof struggled to control the effects of his Epic powers. But facing Obliteration in Babilar was too much. Once the Reckoners leader, Prof has now embraced his Epic destiny. He's disappeared into those murky shadows of menace Epics are infamous for the world over, and everyone knows there's no turning back. . . .
But everyone is wrong. Redemption is possible for Epics Megan proved it. They re not lost. Not completely. And David is just about crazy enough to face down the most powerful High Epic of all to get his friend back. Or die trying.
Praise for the Reckoners series:
#1 New York Times Bestselling Series
The suspense is relentless and the climax explosive. James Dashner, #1 New York Times bestselling author of the Maze Runner series
Another win for Sanderson . . . he's simply a brilliant writer. Period. Patrick Rothfuss, author of the New York Times and USA Today bestseller The Name of the Wind
Action-packed. EW.com
Compelling. . . . Sanderson uses plot twists that he teases enough for readers to pick up on to distract from the more dramatic reveals he has in store. The A.V. Club

Brandon Sanderson is the author of the #1 New York Times bestselling Reckoners series: Steelheart, Firefight, and Calamity, as well as the internationally bestselling books in the Stormlight Archive and the Mistborn trilogy. He was also chosen to complete Robert Jordan's The Wheel of Time series. His books have been published in more than twenty-five languages and have sold millions of copies worldwide. He lives and writes in Utah. To learn more about Brandon and his books, visit him at brandonsanderson.com and follow @BrandSanderson on Twitter.
Loading...
or
Not Currently Available for Direct Purchase