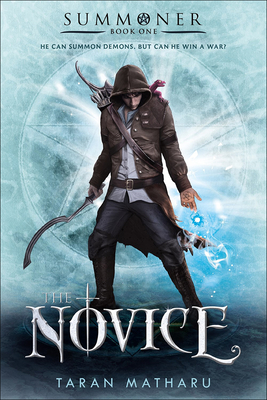 In this "New York Times"-bestselling novel full of action and adventure, a blacksmith's apprentice can summon demons. But can he win a war?

Fletcher is working as a blacksmith's apprentice when he discovers he has the rare ability to summon demons from another world. Chased from his village for a crime he did not commit, Fletcher must travel with his demon, Ignatius, to an academy for adepts, where the gifted are taught the art of summoning.

Along with nobles and commoners, Fletcher endures grueling lessons that will prepare him to serve as a Battlemage in the Empire's war against the savage Orcs. But sinister forces infect new friendships and rivalries grow. With no one but Ignatius by his side, Fletcher must decide where his loyalties lie. The fate of the Empire is in his hands. . . .

"The Novice "by Taran Matharu is book one in the Summoner trilogy, a stunning epic fantasy that started on Wattpad, and garnered over six million views on the site. The paperback edition contains an interview with the author, a special sneak peek of the sequel, "The Inquisition," and more.

"The Inquisition," book two in the series, was also a "New York Times" bestseller.

This plot-focused fantasy adventure will be a satisfying read for a wide age range of readers, especially fans of role-playing games and Christopher Paolini. "VOYA.

Taran Matharu wrote his first book when he was nine years old. At twenty-two, he began posting "The Novice" on Wattpad (the online writing website) and reached over three million reads in less than six months. "The Novice" is the first of three books in the Summoner series, and Taran Matharu's fiction debut. Taran lives in London.
Loading...
or
Not Currently Available for Direct Purchase