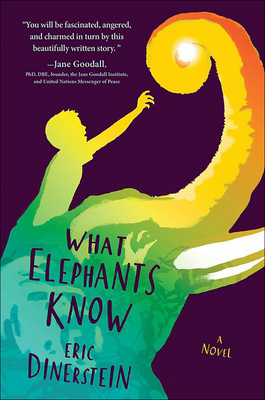 Abandoned in the jungle of the Nepalese Borderlands, two-year-old Nandu is found living under the protective watch of a pack of wild dogs. From his mysterious beginnings, fate delivers him to the King's elephant stable, where he is raised by unlikely parents-the wise head of the stable, Subba-sahib, and Devi Kali, a fierce and affectionate female elephant.When the king's government threatens to close the stable, Nandu, now twelve, searches for a way to save his family and community. A risky plan could be the answer. But to succeed, they'll need a great tusker. The future is in Nandu's hands as he sets out to find a bull elephant and bring him back to the Borderlands.In simple poetic prose, author Eric Dinerstein brings to life Nepal's breathtaking jungle wildlife and rural culture, as seen through the eyes of a young outcast, struggling to find his place in the world.

Eric Dinerstein, PhD, attended Northwestern University and Western Washington University and did his graduate studies in wildlife science at the University of Washington. He is director of biodiversity and wildlife solutions at RESOLVE, where he devotes his time to the conservation of wild populations of elephants, rhinos, tigers, and other endangered species. He was previously chief scientist and vice president for conservation science at the World Wildlife Fund for nearly twenty-five years. Dinerstein began researching tigers in Nepal in 1975 as a Peace Corps volunteer. He later continued fieldwork in the region, studying rhinos and tigers for the Smithsonian Institution. Dinerstein's nonfiction works include: The Return of the Unicorns: The Natural History and Conservation of the Greater One-Horned Rhinoceros; Tigerland and Other Unintended Destinations; and The Kingdom of Rarities.
or support indie stores by buying on
Copyright © 2020 American Booksellers Association