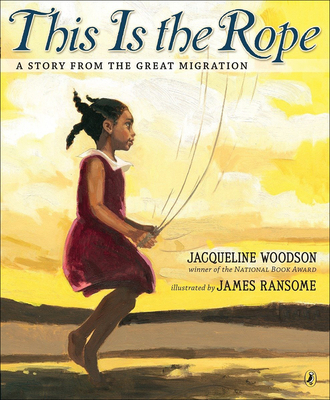 During the time of the Great Migration, millions of African American families relocated from the South, seeking better opportunities.The story of one family's journey north during the Great Migration starts with a little girl in South Carolina who finds a rope under a tree one summer. She has no idea the rope will become part of her family's history. But for three generations, that rope is passed down, used for everything from jump rope games to tying suitcases onto a car for the big move north to New York City, and even for a family reunion where that first little girl is now a grandmother.

Jacqueline Woodson(www.jacquelinewoodson.com)is the 2014 National Book Award Winner for herNew York Timesbestselling memoirBrown Girl Dreaming, which was also a recipient of the Coretta Scott King Award, a Newbery Honor Award, the NAACP Image Award and the Sibert Honor Award. Woodson was recently named the Young People s Poet Laureate by the Poetry Foundation. Sheis the winner of the Margaret A. Edwards Award for lifetime achievement in writing for young adults, the recipient of three Newbery Honors forAfter Tupac and D Foster, FeathersandShow Way, and a two-time finalist for the National Book Award forLocomotionandHush. Other awards include the Coretta Scott King Award andLos Angeles TimesBook Prize forMiracle's Boys. Her most recent books are her novelBeneath a Meth Moonand her picture booksEach KindnessandThis Is the Rope. She lives with her family in Brooklyn, New York."
Loading...
or
Not Currently Available for Direct Purchase