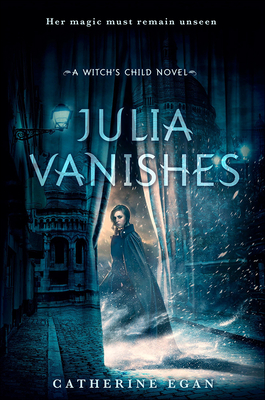 This page-turning fantasy thriller introduces Julia--a thief and spy for hire. Witchcraft may be illegal in her world, but magic still rules.

"The first book in the Witch's Child trilogy has adventure, murder, romance, intrigue, and betrayal with a 16-year-old heroine that is both fierce and flawed at the same time. Catherine Egan is an exciting new talent." --Hypable.com

Julia has the unusual ability to be . . . unseen. Not invisible, exactly. Just beyond most people's senses. It's a dangerous trait in a city that has banned all forms of magic and drowns witches in public Cleansings. But it's a useful trait for a thief and a spy. And Julia has learned--crime pays.
She's being paid very well to infiltrate the grand house of Mrs. Och and report back on the odd characters who live there and the suspicious dealings that take place behind locked doors.
But what Julia uncovers shakes her to the core. She certainly never imagined that the traitor in the house would turn out to be . . . her.
"Egan's debut novel sparkles. A beautifully rendered world and exquisite sense of timing ensure a page-turning experience." --Publishers Weekly, starred review
"Readers will find themselves immediately immersed in the narrative and invested in the fate of Julia, who is both feisty and flawed. There is a richness to this inaugural volume of the Witch's Child trilogy, and readers will be hard pressed to put it down." --Booklist, starred review

CATHERINE EGAN grew up in Vancouver, Canada. Since then, she has lived on a volcanic island in Japan (which erupted while she was there and sent her hurtling straight into the arms of her now husband), in Tokyo, Kyoto, and Beijing, on an oil rig in the middle of Bohai Bay, then in New Jersey, and now in New Haven, Connecticut. She is currently occupied with writing books and fighting dragon armies with her warrior children. You can read more about her at catherineegan.com and follow her on Twitter at @ByCatherineEgan.
or
Not Currently Available for Direct Purchase
Copyright © 2020 American Booksellers Association