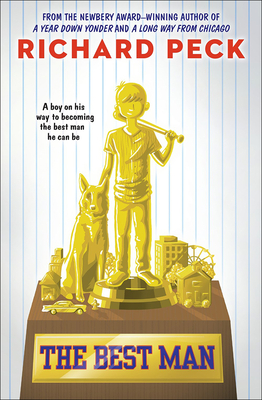 Newbery Medalist Richard Peck tells a story of small-town life, gay marriage, and everyday heroes in this novel for fans of Gary Schmidt and Jack Gantos. Archer Magill has spent a lively five years of grade school with one eye out in search of grown-up role models. Three of the best are his grandpa, the great architect; his dad, the great vintage car customizer; and his uncle Paul, who is just plain great. These are the three he wants to be. Along the way he finds a fourth--Mr. McLeod, a teacher. In fact, the first male teacher in the history of the school. But now here comes middle school and puberty. Change. Archer wonders how much change has to happen before his voice does. He doesn't see too far ahead, so every day or so a startling revelation breaks over him. Then a really big one when he's the best man at the wedding of two of his role models. But that gets ahead of the story. In pages that ripple with laughter, there's a teardrop here and there. And more than a few insights about the bewildering world of adults, made by a boy on his way to being the best man he can be. Amazon Editors' Picks for Fall (Ages 9-12)
New York Times Notable Children's Book
Horn Book Fanfare
School Library Journal Best Books of 2016
Kirkus Best Books of 2016
Chicago Public Library Best Books of 2016

Richard Peck has won almost every children's fiction award, including the Margaret A. Edwards Award, the Newbery Medal, the Scott O'Dell Award, and the Edgar, and he has twice been nominated for a National Book Award. He was the first children's author ever to have been awarded a National Humanities Medal. He lives in New York City. From the Hardcover edition.
Loading...
or
Not Currently Available for Direct Purchase