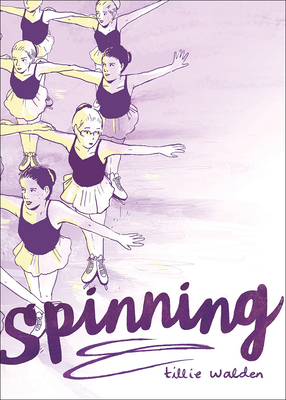 Ignatz Award winner Tillie Walden's powerful graphic memoir captures what it's like to come of age, come out, and come to terms with leaving behind everything you used to know.

It was the same every morning. Wake up, grab the ice skates, and head to the rink while the world was still dark.

Weekends were spent in glitter and tights at competitions. Perform. Smile. And do it again.

She was good. She won. And she hated it.

For ten years, figure skating was Tillie Walden's life. She woke before dawn for morning lessons, went straight to group practice after school, and spent weekends competing at ice rinks across the state. Skating was a central piece of her identity, her safe haven from the stress of school, bullies, and family. But as she switched schools, got into art, and fell in love with her first girlfriend, she began to question how the close-minded world of figure skating fit in with the rest of her life, and whether all the work was worth it given the reality: that she, and her friends on the team, were nowhere close to Olympic hopefuls. The more Tillie thought about it, the more Tillie realized she'd outgrown her passion--and she finally needed to find her own voice.

Tillie Walden is a cartoonist and illustrator from Austin, Texas. Born in 1996, she is a recent graduate from the Center for Cartoon Studies, a comics school in Vermont. Over the course of her time at CCS she published three books with the London based Avery Hill Publishing. She has already received an Eisner Award nomination and two Ignatz Awards for her early works. When she is not drawing comics, Tillie can be found walking and listening to audiobooks or asleep with a cat. She also enjoys studying architecture and tries to incorporate that passion into her comics. Spinning is her first long form autobiographical work.
Loading...
or
Not Currently Available for Direct Purchase