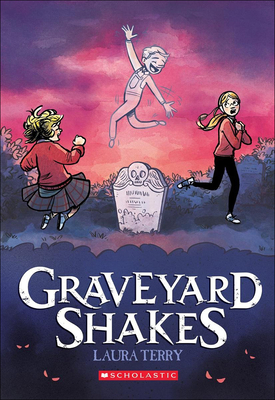 Katia and Victoria are sisters and scholarship students at a private boarding school. While Victoria tries to fit in, Katia is unapologetic about her quirks, even though their classmates tease her. After a big fight, Katia runs away from school. And when Victoria goes looking for her, she accidentally tumbles into the underworld of a nearby graveyard. It is inhabited by ghosts, ghouls, and a man named Nikola, who is preparing a sinister spell that's missing one key ingredient.

Victoria teams up with adorable Little Ghost and Nikola's kindhearted son, and together they search for Katia. They must find her before she becomes Nikola's next victim.

Laura Terry is a graduate of Pratt Institute and The Center for Cartoon Studies. She has self-published a number of minicomics including Morning Song, BFF, and Dance after Dark. Her work has been listed in multiple Best Of lists published by The Comics Journal. In 2012 she received the last of the Xeric grants with her comic Overboard, which was also listed as a Notable Comic of 2013 by Best American Comics. Laura lives in Brooklyn with her poodle, Muffin. Visit her online at www.lauraterry.com.
Loading...
or
Not Currently Available for Direct Purchase