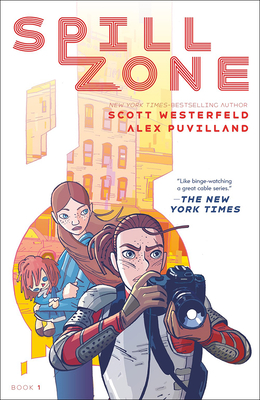 Three years ago an event destroyed the small city of Poughkeepsie, forever changing reality within its borders. Uncanny manifestations and lethal dangers now await anyone who enters the Spill Zone.

The Spill claimed Addison's parents and scarred her little sister, Lexa, who hasn't spoken since. Addison provides for her sister by photographing the Zone's twisted attractions on illicit midnight rides. Art collectors pay top dollar for these bizarre images, but getting close enough for the perfect shot can mean death--or worse.

When an eccentric collector makes a million-dollar offer, Addison breaks her own hard-learned rules of survival and ventures farther than she has ever dared. Within the Spill Zone, Hell awaits--and it seems to be calling Addison's name.

Find out what happens in Spill Zone. And don't miss the sequel, Spill Zone: The Broken Vow.

"Addison is particularly complex: though she is sympathetic, her decisions are intentionally presented as morally questionable. Harsh profanity and violence make this a more appropriate choice for mature readers. This unnerving, gripping title--Westerfeld's first original graphic novel--is bound to entice older comics fans, especially those interested in darker sci-fi and nuanced characterization. . . . A must-have for teen and graphic novel collections." --Kirkus Reviews

Scott Westerfeld is the author of the worldwide bestselling Uglies series and the Locus Award-winning Leviathan series, and is co-author of the Zeroes trilogy. His other novels include the New York Times bestseller Afterworlds, The Last Days, Peeps, So Yesterday, and the Midnighters trilogy. Alex Puvilland was born in France where he grew up reading his father's comic books. He now lives in Los Angeles with his ridiculously talented wife and two extraordinary children, Leo and Adrien. He works for Dreamworks Animation, and does comics whenever he has a moment. Alex co-illustrated Prince of Persia and Templar.
Loading...
or
Not Currently Available for Direct Purchase