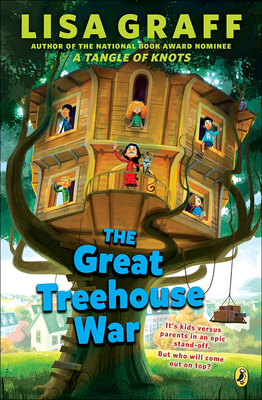 Kids vs. parents An epic treehouse sleepover An awesome group of friends An exciting new book from National Book Award finalist Lisa Graff. Winnie's last day of fourth grade ended with a pretty life-changing surprise. That was the day Winnie's parents got divorced and decided that Winnie would live three days a week with each of them and spend Wednesdays by herself in a treehouse between their houses, to divide her time perfectly evenly. It was the day Winnie's seed of frustration with her parents was planted, a seed that grew until it felt like it was as big as a tree itself. By the end of fifth grade, Winnie decides that the only way to change things is to barricade herself in her treehouse until her parents come to their senses--and her friends decide to join. It's kids vs. grown-ups, and no one wants to back down first. But with ten kids in one treehouse, all with their own demands, things get pretty complicated Even if they are having the most epic slumber party ever. In the newest novel by beloved National Book Award finalist Lisa Graff, kids turn the tables on their parents, and all the rules are tossed out the window. But does Winnie have what it takes to hold her ground and keep everyone happy? This story, with a pitch-perfect middle grade voice and a zany yet poignant situation, is perfect for fans of Sharon Creech, Louis Sachar, and Jack Gantos. Praise for Lisa Graff's novels: The Great Treehouse War "It's kids vs. parents in epic fashion...Graff's whimsical, original work is a breath of fresh air."--School Library Journal "Combining over-the-top storytelling with down-home wisdom, this is] fun."--Booklist " Graff creates] a vibrant patchwork of personalities that gives voice to the power of friendship."--Publishers Weekly "A good-natured satire of helicopter parenting and a celebration of child ingenuity."--Horn Book Lost in the Sun * "Graff writes with stunning insight...consistently demonstrat ing] why character-driven novels can live from generation to generation."--Kirkus Reviews, starred review * "Weighty matters deftly handled with humor and grace."--School Library Journal, starred review "This novel] speaks powerfully, honestly, almost shockingly about our human pain and...redemption. This book will change you."--Gary Schmidt, The Wednesday Wars

"Graff crafts a compelling story about a boy touched with tragedy....And like all the best stories, it ends at a new beginning."--Richard Peck, A Year Down Yonder Absolutely Almost * "A perfect book to share with struggling readers."--Booklist, starred review * "Achingly superb."--Kirkus Reviews, starred review * "Graff's...gentle story invokes evergreen themes of coming to appreciate one's strengths (and weaknesses), and stands out for its thoughtful, moving portrait of a boy who learns to keep moving forward."--Publishers Weekly, starred review "The patrons of my school library have been asking, 'Do you have any books like Wonder by R.J. Palacio?' and now I have the perfect offering."--BookPage

A Tangle of Knots

"A beautiful world of deliciously interconnected stories."--Entertainment Weekly, A- * "Subtle and intricate, rich with humor and insight, this quietly magical adventure delights."--Kirkus Reviews, starred review * "Combining the literary sensibility of E. B. White with the insouciance of Louis Sachar, this] should satisfy readers for years to come."--Booklist, starred review.

Lisa Graff (www.lisagraff.com) is the critically acclaimed and award-winning author of Lost in the Sun, Absolutely Almost, A Tangle of Knots, Double Dog Dare, Sophie Simon Solves Them All, Umbrella Summer, The Life and Crimes of Bernetta Wallflower, and The Thing About Georgie. Lisa Graff's books have been named to more than forty state award lists and have been touted as Best Books of the Year by booksellers, teachers, and librarians. A Tangle of Knots was long-listed for the National Book Award in 2013. Lisa Graff lives with her family just outside of Philadelphia. Follow her on Twitter @LisaGraff.
Loading...
or
Not Currently Available for Direct Purchase