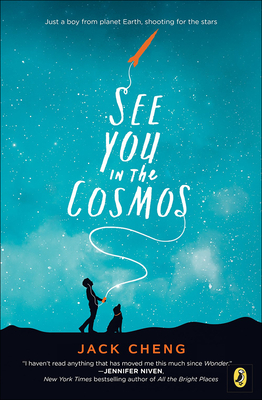 See You in the Cosmos

"I haven't read anything that has moved me this much since Wonder." --Jennifer Niven, author of All the Bright Places A space-obsessed boy and his dog, Carl Sagan, take a journey toward family, love, hope, and awe in this funny and moving novel for fans of Counting by 7s, Walk Two Moons, and The Curious Incident of the Dog in the Night-Time.

11-year-old Alex Petroski loves space and rockets, his mom, his brother, and his dog Carl Sagan--named for his hero, the real-life astronomer. All he wants is to launch his golden iPod into space the way Carl Sagan (the man, not the dog) launched his Golden Record on the Voyager spacecraft in 1977. From Colorado to New Mexico, Las Vegas to L.A., Alex records a journey on his iPod to show other lifeforms what life on earth, his earth, is like. But his destination keeps changing. And the funny, lost, remarkable people he meets along the way can only partially prepare him for the secrets he'll uncover--from the truth about his long-dead dad to the fact that, for a kid with a troubled mom and a mostly not-around brother, he has way more family than he ever knew. Jack Cheng's debut is full of joy, optimism, determination, and unbelievable heart. To read the first page is to fall in love with Alex and his view of our big, beautiful, complicated world. To read the last is to know he and his story will stay with you a long, long time. "Stellar." --Entertainment Weekly
"Life-embracing." --The Wall Street Journal
"Works beautifully." --The New York Times Book Review
"Irresistible." --The Chicago Tribune
"The best I've read in a long, long time." --Holly Goldberg Sloan, author of Counting by 7s
"Riveting, inspiring, and sometimes hilarious." --Kirkus, starred review
"A propulsive stream-of-conscious dive." --Publishers Weekly, starred review
"A gift--a miracle." --Paul Griffin, author When Friendship Followed Me Home
"Exuberant." --Booklist
"Full of the real kind of magic." --Ally Condie, author of Matched
"Absorbing, irresistible." --Common Sense Media
"Incredible." --BookRiot
"Full of innocence and unwavering optimism." --SLC
"Inspiring." --Time for Kids
"Powerfully affirms our human capacity for grace and love and understanding." --Gary D. Schmidt, author of Okay for Now

Jack Cheng was born in Shanghai, raised in Michigan, and lived in Brooklyn for a decade before settling in Detroit. See You in the Cosmos is his first novel for kids. From the Hardcover edition.
Loading...
or
Not Currently Available for Direct Purchase