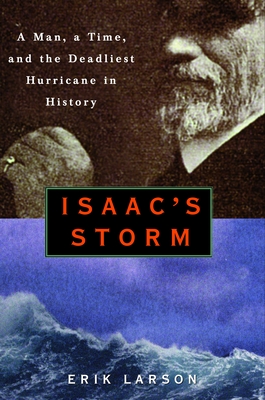 A Man, a Time, and the Deadliest Hurricane in History

At the dawn of the twentieth century, a great confidence suffused America. Isaac Cline was one of the era's new men, a scientist who believed he knew all there was to know about the motion of clouds and the behavior of storms. The idea that a hurricane could damage the city of Galveston, Texas, where he was based, was to him preposterous, "an absurd delusion." It was 1900, a year when America felt bigger and stronger than ever before. Nothing in nature could hobble the gleaming city of Galveston, then a magical place that seemed destined to become the New York of the Gulf.

That August, a strange, prolonged heat wave gripped the nation and killed scores of people in New York and Chicago. Odd things seemed to happen everywhere: A plague of crickets engulfed Waco. The Bering Glacier began to shrink. Rain fell on Galveston with greater intensity than anyone could remember. Far away, in Africa, immense thunderstorms blossomed over the city of Dakar, and great currents of wind converged. A wave of atmospheric turbulence slipped from the coast of western Africa. Most such waves faded quickly. This one did not.

In Cuba, America's overconfidence was made all too obvious by the Weather Bureau's obsession with controlling hurricane forecasts, even though Cuba's indigenous weathermen had pioneered hurricane science. As the bureau's forecasters assured the nation that all was calm in the Caribbean, Cuba's own weathermen fretted about ominous signs in the sky. A curious stillness gripped Antigua. Only a few unlucky sea captains discovered that the storm had achieved an intensity no man alive had ever experienced.

In Galveston, reassured by Cline's belief that no hurricane could seriously damage the city, there was celebration. Children played in the rising water. Hundreds of people gathered at the beach to marvel at the fantastically tall waves and gorgeous pink sky, until the surf began ripping the city's beloved beachfront apart. Within the next few hours Galveston would endure a hurricane that to this day remains the nation's deadliest natural disaster. In Galveston alone at least 6,000 people, possibly as many as 10,000, would lose their lives, a number far greater than the combined death toll of the Johnstown Flood and 1906 San Francisco Earthquake.

And Isaac Cline would experience his own unbearable loss.

Meticulously researched and vividly written, Isaac's Storm is based on Cline's own letters, telegrams, and reports, the testimony of scores of survivors, and our latest understanding of the hows and whys of great storms. Ultimately, however, it is the story of what can happen when human arrogance meets nature's last great uncontrollable force. As such, Isaac's Storm carries a warning for our time.

Praise For Isaac's Storm: A Man, a Time, and the Deadliest Hurricane in History…

"The best storm book I've read, consumed mostly in twenty-four hours; these pages filled me with dread. Days later, I am still glancing out the window nervously. A well-told story."
-- Daniel Hays, author of My Old Man and the Sea

"Isaac's Storm so fully swept me away into another place, another time that I didn't want it to end. I braced myself from the monstrous winds, recoiled in shock at the sight of flailing children floating by, and shook my head at the hubris of our scientists who were so convinced that they had the weather all figured out. Erik Larson's writing is luminous, the story absolutely gripping. If there is one book to read as we enter a new millennium, it's Isaac's Storm, a tale that reminds us that there are forces at work out there well beyond our control, and maybe even well beyond our understanding."
-- Alex Kotlowitz, author of The Other Side of the River and There Are No Children Here

"There is electricity in these pages, from the crackling wit and intelligence of the prose to the thrillingly described terrors of natural mayhem and unprecedented destruction. Though brimming with the subtleties of human nature, the nuances of history, and the poetry of landscapes, Isaac's Storm still might best be described as a sheer page turner."
-- Melissa Faye Greene, author of Praying for Sheetrock and The Temple Bombing

Erik Larson, a contributor to Time magazine, is the author of The Naked Consumer and Lethal Passage (Crown, 1994). His work has appeared in The Atlantic, Harper's, and other national magazines. He lives in Seattle.
Loading...
or support indie stores by buying on