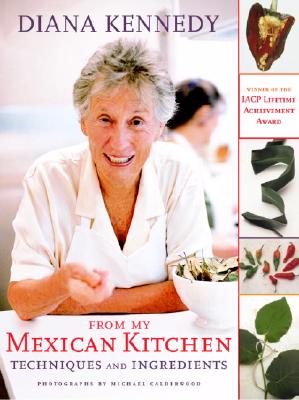 From My Mexican Kitchen

Diana Kennedy has been called the "ultimate authority, the high priestess" of Mexican cooking, and with good reason. For more than forty years she has traveled through her beloved adoptive country, researching and recording its truly extraordinary cuisine. Now Diana turns her attention to the book she readily admits "should have been written years ago."
Diana's objective in From My Mexican Kitchen: Techniques and Ingredients is simple: to provide a guide to better understanding the ingredients Mexico has to offer and how best to prepare them. Her execution is little short of brilliant.
The book is invaluable to the novice eager for an introduction to Mexican cooking, but it is equally important for the aficionados interested in refining and expanding their knowledge and skills.
From My Mexican Kitchen takes readers and cooks on a tour of the primary ingredients of the cuisine, from achiote and avocado leaves to hoja santa, huauzontle, and the sour tunas called xoconostles--which are increasingly available in the United States. Diana unravels the dizzying array of fresh and dried chiles, explaining their uses and preparation; vibrant color photographs at last take the guesswork out of identifying them
Step-by-step photographs and Diana's trademark instructions (peppered with her over-the-shoulder asides) lead us through the proper techniques for making moles, tamales, tortillas, and much more. Some highlights: chiles rellenos, frijoles de olla, salsa de jitomate, fresh corn tamales from Michoacan, and bolillos (Mexican bread rolls). These recipes provide a solid grounding for the new Mexican cook, and Diana then sends readers to her earlier work for more advanced regional recipes.
Brilliantly photographed, with a text at once lively and authoritative, Diana Kennedy's From My Mexican Kitchen is the one book anyone interested in this food cannot afford to be without.

DIANA SOUTHWOOD KENNEDY went to Mexico in 1957 to marry Paul P. Kennedy, the foreign correspondent for the New York Times. In 1969, at the suggestion of Craig Claiborne, she began teaching Mexican cooking classes and in 1972 published her first cookbook. She has been decorated with the Order of the Aztec Eagle, the highest honor bestowed on foreigners by the Mexican government. She lives much of the year in her ecological adobe house in Michoacan, Mexico, which also serves as a research center for Mexican cuisine."
Loading...
or
Not Currently Available for Direct Purchase