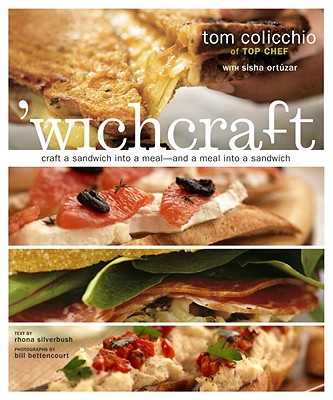 Craft a Sandwich into a Meal--And a Meal into a Sandwich: A Cookbook

Slow-roasted meats, marinated vegetables, surprising flavor combinations, this is not your mother’s sandwich.

With acclaimed restaurants located across the United States, and a high-profile job as head judge of the hit show Top Chef, Tom Colicchio is one of the best-known chefs and personalities in the culinary world today. His popular chain of ’wichcraft sandwich shops is known for crafting sandwiches with high-quality fresh ingredients prepared to Colicchio’s exacting standards. And since the first ’wichcraft opened in 2003, diners can’t seem to get enough.

In ’wichcraft, Colicchio shares the shops’ secrets with step-by-step recipes for all their best-loved offerings. You’ll learn how to create new classics like Roasted Turkey with Avocado, Bacon, Onion Marmalade, and Mayonnaise, and Sicilian Tuna with Fennel, Black Olives, and Lemon; and elevate basic cold cuts through imaginative combinations like Smoked Ham with Avocado and Butter, and Salami with Marinated Cauliflower and Bitter Greens. Routine staples are refashioned into unforgettable meals, like Onion Frittata with Roasted Tomato and Cheddar, and Slow-Roasted Pork with Red Cabbage, Jalapeños, and Mustard. ’wichcraft is stuffed with sandwiches like these, and many more, that will add something special to both your lunchbox and your life.

With 100 full-color photographs, recipes for pantry items including dressings and condiments, and a host of sandwich cookies and ice cream treats to round out your meals, this is the book to get a little ’wichcraft magic going in your own kitchen.

TOM COLICCHIO was named Best New Chef by Food & Wine before opening the acclaimed Gramercy Tavern in 1994. He received the 2000 James Beard Award for Best Chef in New York City and for Best General Cookbook in 2001 for his first book, Think Like a Chef. His groundbreaking restaurant, Craft, was awarded three stars by the New York Times and named the James Beard Foundation’s Best New Restaurant in America in 2002. The Craft restaurant family has grown to include Craftbar, Craftsteak, and ’wichcraft sandwich shops in New York City, San Francisco, and Las Vegas. Colicchio is also the head judge of the hit Bravo reality show Top Chef and an avid lover of sandwiches. He lives in New York City.

SISHA ORTUZAR is a graduate of the Culinary Institute of America. After cooking in Chile, New Orleans, and New York City’s Gramercy Tavern, he cofounded ’wichcraft with Tom Colicchio in 2003. He lives in New York City.
Loading...
or
Not Currently Available for Direct Purchase