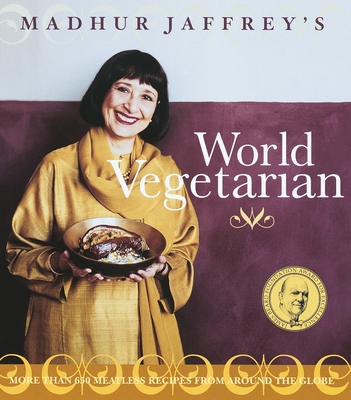 More Than 650 Meatless Recipes from Around the World: A Cookbook

In this James Beard Award-winning cookbook, Madhur Jaffrey draws on more than four decades of culinary adventures, travels, and experimentation to create a diverse collection of more than 650 vegetarian recipes featuring dishes from five continents.

Madhur Jaffrey's World Vegetarian exemplifies Madhur's unsurpassed ability to create simple, flavorful homecooking that is well within the reach of every cook. Extensive sections on beans, vegetables, grains, and dairy explore the myriad ways these staples are enjoyed worldwide. Madhur balances appealing, uncomplicated dishes such as sumptuous omelets and rich polentas with less familiar ingredients such as green mangoes, pigeon peas, and spelt. She demystifies the latter with clear-cut explanations so that incorporating new combinations and interesting flavors into everyday cooking becomes second nature. She also offers substantial sections on soups, salads, and drinks, as well as sauces and other flavorings, to help round out a meatless meal and add exciting new flavors to even the most easily prepared dishes.

Each section opens with a detailed introduction, where Madhur describes methods for preparation and storage, as well as different cooking techniques and their cultural origins. And a complete glossary of ingredients and techniques clarifies some of the little-known elements of the world's cuisines so that even the uninitiated can bring the flavors of Asia, the Middle East, the Caribbean, and more to their tables.

Throughout this extensive collection, Madhur includes personal anecdotes and historical contexts that bring her recipes to life, whether she's remembering field of leeks she saw in the mountains of northern Greece or describing how corn-based dishes arrived in Indonesia through colonial trade.

Committed vegetarians will rejoice at the wide variety of meatless fare Madhur offers, and nonvegetarians will enjoy experimenting with her global flavorings. This highly readable resource promises to be a valuable addition to any cook's library, helping everyone make healthful ethnic foods a part of everyday cooking.

Praise For Madhur Jaffrey's World Vegetarian: More Than 650 Meatless Recipes from Around the World: A Cookbook…

"This book is a priceless treasury of eclectic, fascinating, and beautifully written recipes that are unified by Madhur Jaffrey's own seductive esthetic, which is born out of her immersion in the traditions of Indian cooking and her respect and passion for the garden and the farmer's market."
-- Alice Waters

"Colors, flavors, and textures are so artfully combined in these enticing vegetable dishes, one would never have a sense of deprivation for having forsaken meat. With such a seductive diversity, it is a blessing that the recipes are explicit, and most are simple to do."
-- Mimi Sheraton

"In World Vegetarian, Madhur Jaffrey proves as exciting a travel guide as she is a cook! Her gastronomic tour around the globe is accented with useful cooking tips and lively anecdotes, while the varied and well-written recipes are a mouthwatering tour-de-force. From Azuki beans to Zahtar spice, from the Old World to the New, the scope and depth of this book are breathtaking."
-- Michael Romano

"Madhur Jaffrey's World Vegetarian is Exhibit A in showing us just how large that world is today and simultaneously how small the globe, as we connect to cultures and cuisines on a worldwide web of flavors and ingredients. While East Indians are eating Spicy Corn with Sesame Seeds and Tomatoes, Americans are eating Green Peas with Coconut and Cilantro. Jaffrey's clarity is as perfected in small details as in large and everywhere her taste unifies dishes from lands far and near. Buy one for your kitchen shelf and one for your carry-on luggage."
-- Betty Fussell

MADHUR JAFFREY is the author of several cookbooks—seven of which have won James Beard Awards—and was named to the Who’s Who of Food and Beverage in America by the James Beard Foundation. She is the recipient of an honorary CBE from Queen Elizabeth II for her services to drama and promoting the appreciation of Indian food and culture. She is also an award-winning actress, having won the Silver Bear for Best Actress at the Berlin Film Festival, with numerous major motion pictures to her credit. She lives in New York City.
Loading...
or support indie stores by buying on