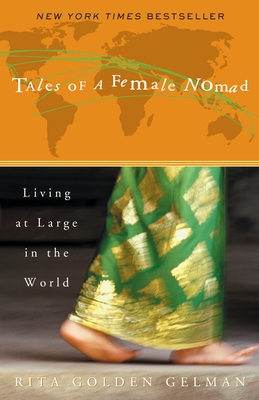 Tales of a Female Nomad (Paperback)

Living at Large in the World

The true story of an ordinary woman living an extraordinary existence all over the world.

“Gelman doesn’t just observe the cultures she visits, she participates in them, becoming emotionally involved in the people’s lives. This is an amazing travelogue.” —Booklist

At the age of forty-eight, on the verge of a divorce, Rita Golden Gelman left an elegant life in L.A. to follow her dream of travelling the world, connecting with people in cultures all over the globe.

In 1986, Rita sold her possessions and became a nomad, living in a Zapotec village in Mexico, sleeping with sea lions on the Galapagos Islands, and residing everywhere from thatched huts to regal palaces. She has observed orangutans in the rain forest of Borneo, visited trance healers and dens of black magic, and cooked with women on fires all over the world. Rita’s example encourages us all to dust off our dreams and rediscover the joy, the exuberance, and the hidden spirit that so many of us bury when we become adults.

Rita Golden Gelman is the author of more than seventy children's books, including Inside Nicaragua, which was one of the ALA's Best Young Adult Books of 1988, and More Spaghetti, I Say!, a staple in every first grade classroom. As a nomad, Rita has no permanent address. Her most recent encampments have been in Mexico and New York City.

Praise For Tales of a Female Nomad: Living at Large in the World…

“Whenever I open an atlas . . . part of me wants to pack up and hit the road for a year or two. But I doubt I’ll ever do it, because I’m too practical. Rita Golden Gelman . . . didn’t let practicalities stop her.” —Los Angeles Times

“Tales of a Female Nomad follows Gelman from fragility to self-confidence as she traverses the globe.” —Chicago Tribune

"This is a courageous, gentle, fascinating book, but be forewarned it's no idle armchair read. Like all of the best travel writing, Rita Golden Gelman's wanderings are likely to provoke powerful self-examination, which could easily catalyze your own wanderlust and curiosity."
—Alexander F. Lobrano, European correspondent, Gourmet, and author of Frommer's Irreverent Guide to Paris

"Rita Gelman takes us on a journey filled with cultural interactions and human observations. An inspirational story, particularly for anyone considering a major lifestyle change."
-- Melinda Blanchard, co-author of A Trip to the Beach
or support indie stores by buying on
Copyright © 2020 American Booksellers Association