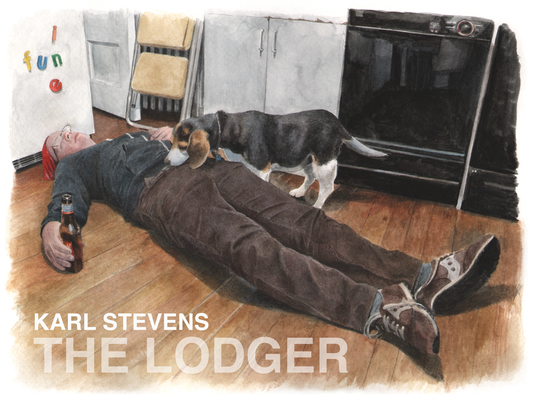 After losing his girlfriend and hip Boston apartment, Karl Stevens moves into a spare room in his painting professor's home, where his bohemian adventures in sex and boozing converge with the rituals of life with a family and an unruly beagle named Cookie. In a series of humorous, poignant, and gorgeously rendered stories, The Lodger chronicles a tumultuous year in the life of the author as he grows as an artist and a man. Combining comic strips originally published in The Phoenix, Boston's leading alternative weekly, with exquisite watercolors and oil paintings, The Lodger follows the Xeric-winning and Ignatz-nominated artist's Guilty and Whatever as a penetrating and visually stunning depiction of love, loss, and the moving minutiae of everyday life. A Los Angeles Times Book Prize finalist.

Karl Stevens: Karl Stevens is a graphic novelist and painter. His first book, Guilty, was published in 2004 with a grant from the Xeric Foundation. He is also the author of Whatever (2008), The Lodger (A Los Angeles Times Book Prize Finalist, 2010), and Failure (2013). His comic strip, "Whatever," ran from 2005-2008 in the alternative weekly the Boston Phoenix. A collection of the strips was published in April 2008 by Alternative Comics. In May 2008 "Whatever" was replaced by a new comic, "Succe$$," illustrated by Stevens and written by Gustavo Turner. "Failure" was his final series for the Phoenix. As an illustrator, Stevens collaborated with Anthony Apesos on the book Anatomy for Artists: A New Approach Discovering, Learning, and Remembering the Body, released in October 2007 by North Light Books. His short stories have appeared in Volumes 1 and 3 of Blurred Vision, anthologies of "New Narrative Art" published by Blurred Books. Stevens is represented by the Carroll and Sons Gallery in Boston.
Loading...
or
Not Currently Available for Direct Purchase