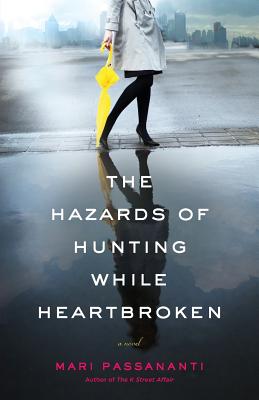 The Hazards of Hunting While Heartbroken (Paperback)

Zo Clark thinks her world will implode when her fianc dumps her on the eve of their splashy wedding. After nearly a decade with her college sweetheart, Zo feels like a teenager about to be eaten alive by the New York dating scene. And her problems don't end there. Zo works a less-than-ideal job, managing other people's careers while her own ambitions wither. To add insult to injury, she does so in the employ of a larger than life woman whose staff measures the boss's emotional state by the zealousness of her make up application. Quitting is out of the question; Zo 's rent doubled when her fianc bailed. Enter Oscar Thornton. He's handsome, charming, attentive and rich - the perfect boyfriend. But does he harbor a dark secret? Or will Zo torpedo her newfound happiness by indulging a far fetched suspicion? The Hazards of Hunting While Heartbroken tells the story of a young woman who sets out to find a man to solve her problems. Instead she finds herself facing her own shortcomings, testing her oldest friendships and realizing that she has the power to make herself happy. Packed with snappy dialogue and playful wit, The Hazards of Hunting While Heartbroken will strike a chord with any woman who's ever allowed herself to think, My life would be perfect, if I could just meet the right guy.

Mari Passananti has practiced law and worked in a major legal search firm. A graduate of the University of Rhode Island and Georgetown University Law Center, she lives in Boston, where she divides her time between writing and trying to keep up with her toddler. The Hazards of Hunting While Heartbroken is her first novel.
or support indie stores by buying on
Copyright © 2020 American Booksellers Association