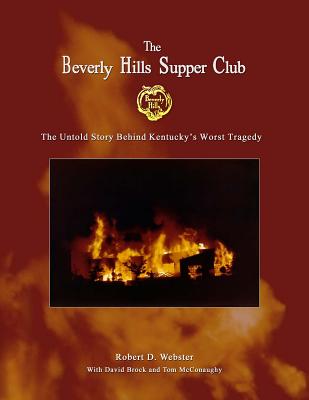 This is the complete history of the alleged mob activity in Newport, Kentucky, and the magnificent Beverly Hills Supper Club, where 169 people died and the lives of thousands were changed in an instant. Unlike other publications, however, this is the true untold story of what led to Kentucky's worst tragedy--a story of greed, corruption, deceit, mafia rule, government cover-ups, kidnapping, and even murder. In fact, this book details one of the worst case of mass murder in US history.

Robert Webster is a northern Kentucky native and author of numerous articles on local and regional history. He has written three previous books, two of which received Kentucky History Awards. Bob is a 1976 graduate of Holmes High School and attended Morehead State University, where he earned a Bachelor of Arts degree in journalism. He is a member of the Kenton County Historical Society and, at the time of this publication, proudly serves as their vice president. Tom McConaughy is a longtime friend and former coworker of David Brock, and was well aware of Brock's experience the night of the tragic fire. When other witnesses stepped forward and Brock began his investigation, Tom signed on without question and soon became one of the investigation's primary researchers.
Loading...
or
Not Currently Available for Direct Purchase