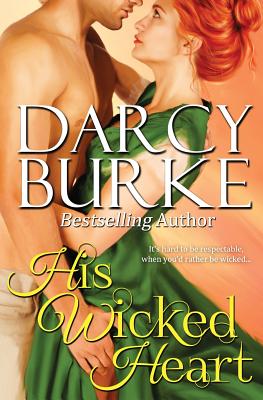 IT'S HARD TO BE RESPECTABLE Jasper Sinclair, Earl of Saxton, made a bargain with his devil of a father to marry in one month's time. But instead of shackling himself to an acceptable debutante, he indulges his baser needs. He joins a fighting club and pursues a delectable woman who may not be what she seems. Soon he finds himself battling addictions that threaten his already wicked heart. WHEN YOU'D RATHER BE WICKED Orphaned seamstress Olivia West wants the chance to lead an honest, respectable life, but the arrogant Earl of Saxton launches a daunting campaign to make her his mistress. Destitute and desperate, she agrees to one night with the dangerous lord, hatching a scheme to take his money and keep her virtue. However, Jasper uncovers her deception and vows to claim what he's owed-not his money, her.

Darcy Burke wrote her first book at age 11, a happily ever after about a swan addicted to magic and the female swan who loved him, with exceedingly poor illustrations. An RWA Golden Heart(R) Finalist, Darcy loves all things British (except tomatoes for breakfast, or any other time of day, actually) and happy ever afters. A native Oregonian, Darcy lives on the edge of wine country with her devoted husband, their two great kids, and three cats. In her -spare- time Darcy is a serial volunteer enrolled in a 12-step program where one learns to say -no, - but she keeps having to start over. She's also a fair-weather runner, and her happy places are Disneyland and Labor Day weekend at the Gorge. Visit Darcy online at http: //www.darcy-burke.com, follow her on Twitter at http: //twitter.com/darcyburke, or like her Facebook page, http: //www.facebook.com/darcyburkefans.
or
Not Currently Available for Direct Purchase
Copyright © 2020 American Booksellers Association