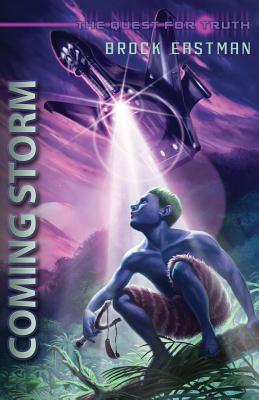 Obbin isn't your average boy, he's a prince of the Blauwe Mensen. What's more he's blue. A story from The Quest for Truth series by Brock Eastman, Coming Storm, gives readers a fast paced adventure from the character Obbin. Winning a race against his brother Rylin to the top of a tall Oak tree, he spots a ship falling to Earth. After going against his brother's warnings, Obbin finds himself face to face with the Wikk twins, Mason and Austin, and their ship the Phoenix. When a trade with them goes badly, he nearly falls to his death. Coming Storm was written for the January 2012 issue of Focus on the Family's Clubhouse magazine. This version is full color.

Brock D. Eastman likes to write, but his main focus is on his family. They reside at the base of America's mountain, and are learning to call Colorado home. However, they sometimes need to visit the comfortable cornfields and hospitality of the Midwest, especially during the harvest. Brock is Product Marketing Manager at Focus on the Family, where he has the privilege to work on the world renown Adventures in Odyssey brand, a show his dad got him hooked on when he was little boy. He started writing The Quest for Truth series in 2005 and 5 years later, with his wife's encouragement, signed a publishing deal. In that same year he signed 2 additional contracts, giving him 9 books releasing in 2.5 years. YIKES! He's always thinking of his next story and totes a thumb-drive full of ideas.
Loading...
or support indie stores by buying on