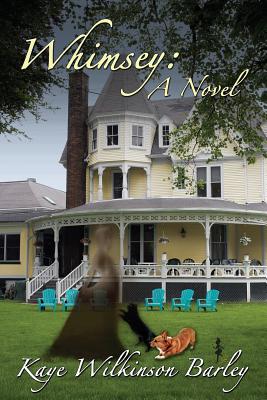 Here's what people are saying about WHIMSEY - - - "Delightful " - Margaret Maron, New York Times Best-Selling Author. Winner of the Edgar, Anthony, Agatha, and Macavity Awards, and 2013 Mystery Writers of America Grand Master "Kaye Barley is a treasure and a delight. Her wit, wisdom, imagination--and yes, whimsy --shine from every page." - Hank Phillippi Ryan, Agatha, Anthony, and Macavity Award-Winning Author WHIMSEY is a novel of southern fiction with a splash of magic and a touch of fantasy, topped with a sprinkling of humor. The magic was already there when cigar-smoking matriarch Elizabeth Calhoun established an artist's colony on an island off the coast of Georgia and named it Whimsey. Elizabeth's ghost still drops in from time to time to make sure things are going as she planned. There's also a wicked pixie named Earlene who fancies tight-fitting designer clothes and Louboutin stilettos. Elizabeth's grandniece, Emma Hamilton Foley, a once-promising jewelry designer who moved away from the island, now fears her talent has deserted her. Along with her four best childhood friends, she has been invited to be a resident artist at Whimsey's new upscale gallery, Les toiles. To join them, she'll need to regain her talent, face the demons from her past and her feelings about Eli Tatnall, whom she loved as a girl. Will moving back to the Island of Whimsey bring the magic back? WHIMSEY is a story of hope and affirmation, about families and best girlfriends, connections and feelings. It's about the things in life that make us happy and the things that scare us to death. And the people who walk through life with us.

WHIMSEY is Kaye Wilkinson Barley's first novel. She lives with her husband, Don, in the North Carolina Mountains along with their Harley Doodle Barley, the Wonder Corgi. You can follow news about Whimsey here - http: //www.kayewilkinsonbarley.com/ Kaye is Blog Mistress of Meanderings and Muses, which you can follow here - http: //www.meanderingsandmuses.com/ She also steps in as "Oh, Kaye! once a month at Jungle Red Writers - http: //www.jungleredwriters.com/ She was a contributor to two Western North Carolina regional anthologies - "Clothes Lines," and "Women's Spaces Women's Places." Both edited by Celia H. Miles and Nancy Dillingham
Loading...
or support indie stores by buying on