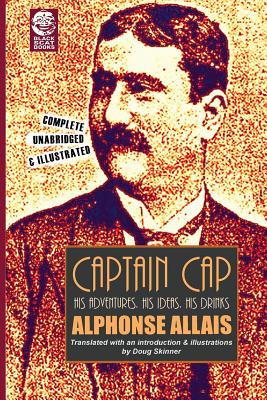 His Adventures, His Ideas, His Drinks

A mammoth madcap trade paperback edition -- the complete and unabridged translation of the original 1902 French classic by Alphonse Allais. 370 pages, including eight uncollected "Captain Cap" stories, plus a "Cappendix" of rare historical pictures. The book is illustrated throughout with witty drawings by Doug Skinner, in addition to his extensive notes on the translation and lively introduction. Don't settle for imitations, this is 100% pure absurdist humor.

ALPHONSE ALLAIS (1854-1905) was a peerless French humorist, celebrated posthumously by the Surrealists for his elegant style and disturbing imagination. In addition to composing absurdist texts for newspapers such as LE CHAT NOIR and LE JOURNAL, he experimented with holorhymes, invented conceptual art, and created the earliest known example of a silent musical composition: FUNERAL MARCH FOR THE OBSEQUIES OF A DEAF MAN (1884). Truly ahead of his time (as well as ours), Allais is needed now more than ever. His mischievous work remains fresh, funny, and always surprising. DOUG SKINNER (translator) has written numerous scores for theater and dance, particularly for actor/clown Bill Irwin (THE REGARD OF FLIGHT). His articles, cartoons, and translations have appeared in THE FORTEAN TIMES, FATE, THE ANOMALIST, NICKELODEON, WEIRDO, BLACK SCAT REVIEW, and other periodicals. His translation of Isidore Isou's CONSIDERATIONS ON THE DEATH AND BURIAL OF TRISTAN TZARA was published by Black Scat Books.
or support indie stores by buying on