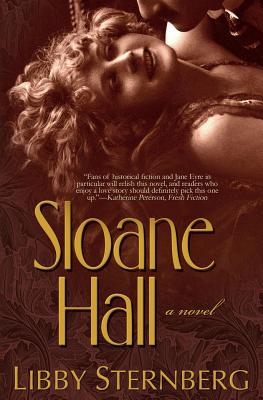 In 1920s Hollywood, young John Doyle learns the craft of cinematography when a stupid mistake costs him his job. On a tip, he heads to Sloane Hall, the estate of a famous silent screen actress, Pauline Sloane, where he lands a position as chauffeur. Sloane Hall first offers him peace as he enjoys the bounty of the luxurious home, then unrest as its beautiful namesake returns and starts preparing for her first talking picture. Despite his best efforts to resist, John falls hopelessly in love with his employer. His future brightens, however, when she appears to return his affection, leading to plans for a secret wedding-until other awful secrets intrude, leading to heartbreak and separation. A story of obsession and forgiveness, Libby Sternberg's Sloane Hall was inspired by Charlotte Bronte's Jane Eyre. ------ "An original story with complex character development...(Sternberg) knows how to tell a story and she does it well....a refreshing tale." Carolyne Van Der Meer, Bronte Studies journal, September 2011 "Libby Sternberg's intelligent and intriguing Jane Eyre reimagining has achieved two of the most difficult goals in a novel: being a page turner and paying a worthy tribute to Charlotte Bront 's immortal story." -- THE BRONTE BLOG "Sternberg never loses sight of the story she's re-telling, but this novel is definitely her own. Readers have things to figure out and look forward to. Her prose flows beautifully with vivid descriptions of people and places, bringing to life a Los Angeles of times gone by. Fans of historical fiction and Jane Eyre in particular will relish this novel, and readers who enjoy a love story should definitely pick this one up."-KATHERINE PETERSON, FRESH FICTION "Admittedly inspired by Jane Eyre, Sloane Hall contains a similar plot with a few surprising twists. As two very troubled individuals try to convince each other of their love, destructive forces work to destroy that attraction. All the characters are well developed, interesting people driven by their desires....What makes Sloane Hall different and intriguing is the setting. The depictions of the movie business and of social life amongst movie elite during Prohibition effectively take the reader back to a free-wheeling time-well worth reading."-ROBIN LEE, ROMANCE REVIEWS TODAY.

Libby Sternberg is the author of numerous novels. Her first YA mystery was an Edgar nominee, and her romantic comedy Fire Me (written as Libby Malin) has been optioned for film. Although she originally studied voice at Peabody Conservatory, she ultimately followed her dream of becoming a writer and is now the editor-in-chief of the boutique publisher Istoria Books and a freelance copy editor for a major publisher. She lives in Pennsylvania.
or
Buy Here
Copyright © 2020 American Booksellers Association