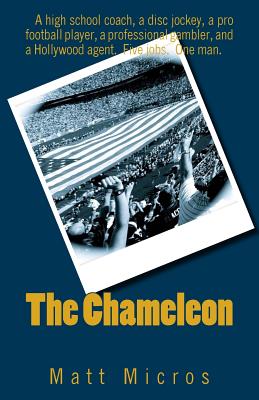 After watching his high school rival get elected Governor of Connecticut, California beach bartender, John Mann, is goaded into a bet that has him attempt to succeed at five different high profile jobs. He can secure the jobs by any means necessary--beg, steal, lie or call in favors--but once he has them, he has a maximum of six months to succeed at each. Blazing a trail that runs through Salisbury, Connecticut, Dallas, Cleveland, Las Vegas and Los Angeles, he immerses himself in each position, befriending dozens of people along the way. But unable to share who he "really" is, John begins to wonder that very question himself. THE CHAMELEON, is a middle-age, coming of age story about friendship, love, reaching your potential, and finding a place to call home.

Matt Micros received a B.A. in American Studies from the University of Notre Dame and his M.S. in Television, Radio and Film from Syracuse University's Newhouse School of Communications, before working in television production in Los Angeles for nearly a decade. He followed with a stint at Creative Artists Agency, before returning to the East Coast. The Chameleon is his second novel, following the well-received, The Knights of Redemption. He lives in Stratford, Connecticut with his wife, Katy and their yellow lab, Mr. Beans.
Loading...
or support indie stores by buying on