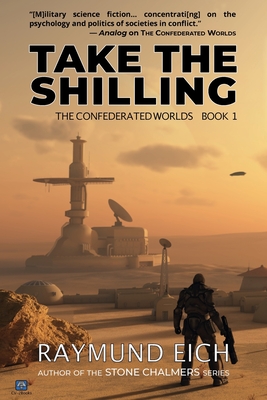 "Military science fiction concentrating] on the psychology and politics of societies in conflict."-Analog, on the Confederated Worlds series

The Confederated Worlds implanted in his brain the skills to make him a soldier. He had to learn for himself how to survive interstellar war.

Tomas Neumann sought escape from his backwater planet and overbearing mother, and a mentor to replace his long-dead father. "Taking the shilling"-enlisting in the Confederated Worlds military-promised both.

But despite the soldier's skills implanted in his brain, combat still threatened to destroy him, in body and in spirit. Grieving for lost comrades, demoralized by a spiral of atrocities, could Tomas learn what he needed to survive, before facing his war's ultimate challenge?

Raymund Eich files patent applications, earned a Ph.D., won a national quiz bowl championship, writes science fiction, and affirms Robert Heinlein's dictum that specialization is for insects. In a typical day, he may talk with biochemists, chip designers, patent attorneys, epileptologists, and rocket scientists. Hundreds of papers cite his graduate research on the reactions of nitric oxide with heme proteins. His novels include the first two volumes in the Confederated Worlds series, TAKE THE SHILLING and OPERATION IAGO (coming July 2014), and evolutionary psychology hard science fiction novel NEW CALIFORNIA. He lives in Houston with his wife, son, and daughter.
Loading...
or support indie stores by buying on