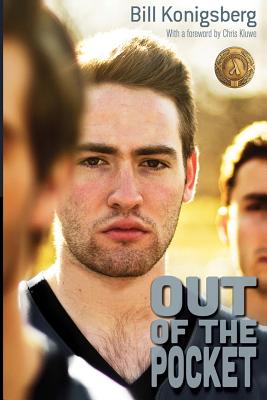 Out of the Pocket

“Bobby Framingham is a high school football star. Bobby also is gay. When he's outed by a newspaper reporter, he thinks his life is ending -- but it's just beginning!”
— Carol Schneck, Schuler Books & Music, Okemos, MI
View the List

The 2009 Lambda Literary Award-winning novel is finally available in paperback This new second edition includes two brand new bonus chapters, a foreword by former NFL punter Chris Kluwe, and an afterword by outsports.com co-founder Jim Buzinski. Star quarterback Bobby Framingham, one of the most talented high school football players in California, knows he's different from his teammates. They're like brothers, but they don't know one essential thing: Bobby is gay. Can he still be one of the guys and be honest about who he is? When he's outed against his will by a student reporter, Bobby must find a way to earn back his teammates' trust and accept that his path to success might be more public, and more difficult, than he'd hoped. An affecting novel about identity that also delivers great sportswriting. "A thought-provoking, funny, and ultimately uplifting story of self-actualization that masterfully defies stereotypes about both coming out and team sports." -School Library Journal "A thoughtful, powerful novel." -Booklist "It's tough enough completing your pass as the linebackers blitz, but when your private life is also crashing in, the game is about survival. A hard-hitting first novel about quarterbacking your life." - Robert Lipsyte, author of Raiders Night "How I rooted for Bobby, and all his imperfect, complicated, oh-so-human friends." - Catherine Gilbert Murdock, author of Dairy Queen and The Off Season.

Bill Konigsberg is the award-winning author of OUT OF THE POCKET (Lambda Literary Award, 2009) and OPENLY STRAIGHT (Sid Fleischman Award for Humor, 2014). Before turning his attention to fiction, he was an award-winning sports writer for ESPN.com and The Associated Press. He lives in Chandler, Arizona, with his husband, Chuck Cahoy.
Loading...
or support indie stores by buying on