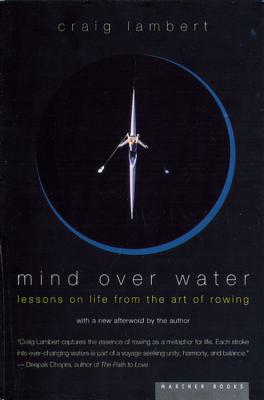 Lessons on Life from the Art of Rowing


Praise For Mind Over Water: Lessons on Life from the Art of Rowing…

Lambert has finished the course well in Mind Over Water, which has the same attributes as the rowing he adores: precision, grace, and total immersion. Boston Globe

"A staff writer and editor for Harvard Magazine tells how sculling became a path to personal growth and how 'lessons learned afloat carry over onto dry land.' The result is a 'thoughtful, lovingly drawn meditation,' Caroline Knapp wrote here last year. 'The river becomes a character in its own right, something to dip into for a time, something transporting.'" The New York Times —

Craig Lambert, a staff writer and editor at Harvard Magazine, has also written for Sports Illustrated and Town & Country. He trains and races in single sculls on the Charles River in Boston, and occasionally competes in major rowing events, such as the Head of the Charles Regatta.