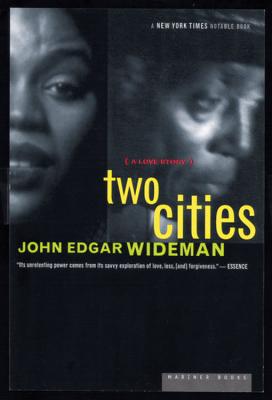 A redemptive, healing novel, Two Cities brings to brilliant culmination the themes John Edgar Wideman has developed in fourteen previous acclaimed books. It is a story of bridges -- bridges spanning the rivers of Philadelphia and Pittsburgh, bridges arching over the rifts that have divided our communities, our country, our hearts. Narrated in the bluesy voices of its three main characters, Two Citiesis a simple love story, but it is also about the survival of an endangered black urban community and the ways that people discover for redeeming themselves in a society that is failing them. With its indelible images of confrontation and outrage, matched in equal measure by lasting impressions of hope, Two Cities is a compassionate, lacerating, and nourishing novel.

"A masterpiece of verve and feeling. Wideman's writing, like Toni Morrison’s, is so pure and convincing that he can break the rules of classical storytelling, even invent some new ones." Boston Globe

"This novel is about two wounded souls who fall in love under the pressure of urban warfare in Pittsburgh and Philadelphia. 'Through Wideman's masterly narrative the reader learns how to accept hopelessness without giving up hope,' Walter Mosley wrote here last year. ' Two Cities is as enjoyable as it is important.'" -- Scott Veale The New York Times

"Wideman is now our leading black male writer...and one of our finest writers, period." New Republic

JOHN EDGAR WIDEMAN is the author of more than twenty works of fiction and nonfiction, including the award-winning Brothers and Keepers, Philadelphia Fire, and the story collection God’s Gym. He is the recipient of two PEN/ Faulkner Awards and has been nominated for the National Book Award.
Loading...
or support indie stores by buying on