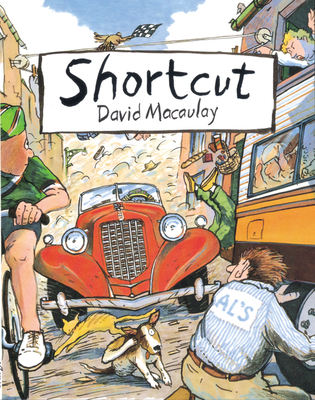 Albert and his trusty mare, June, set off early on market day to sell their melons in town, thus beginning a mysterious chain of events in a thought-provoking journey that exposes ordinary life as an intricate sequence of action and reaction.

"Despite its brevity, the book forces readers to keep track of several story lines at the same time, which culminate in an entertaining ride through Macaulayville. . . . Fiercely provocative, but mostly -- funny." Kirkus Reviews with Pointers

David Macaulay is an award-winning author and illustrator whose books have sold millions of copies in the United States alone, and his work has been translated into a dozen languages. Macaulay has garnered numerous awards including the Caldecott Medal and Honor Awards, the Boston Globe–Horn Book Award, the Christopher Award, an American Institute of Architects Medal, and the Washington Post–Children’s Book Guild Nonfiction Award. In 2006, he was the recipient of a MacArthur Fellowship, given “to encourage people of outstanding talent to pursue their own creative, intellectual, and professional inclinations.” Superb design, magnificent illustrations, and clearly presented information distinguish all of his books. David Macaulay lives with his family in Vermont.
or support indie stores by buying on